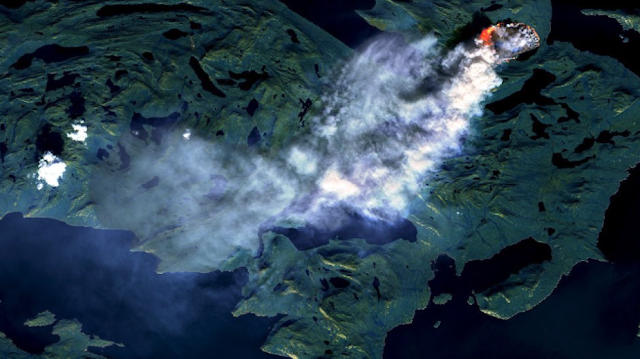 Having no trees to speak of, Greenland is not high on  the  list  of  nations suffering forest fires, but this summer has been hot & dry enough to dessicate arctic  peat  bogs  to the point of combustion. Since July 1st, several hundred thousand tonnes of carbon rich soil have burned:

"The only record I found is the MODIS active fire record. It's a satellite that measures the temperature of the surface and can locate hotspots from fire," said Dr Stef Lhermitte from Delft University in the Netherlands.
"I think that fires have been there before but what's different is that this fire is big, in Greenlandic terms; that is unusual. It's the biggest one we have in the satellite record."
Dr Lhermitte's analysis suggest that the satellite has detected more fires in 2017 alone in Greenland than in the 15 years it has been operating. A previous large outbreak was seen in 2015.


One key question about these fires is the the influence of a changing climate. 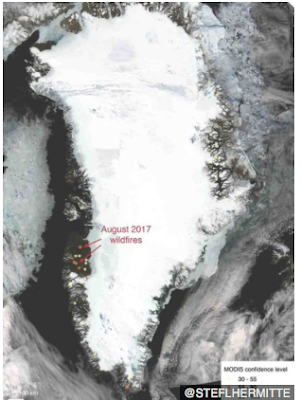 "This peat is less than 70km from the ice sheet. It's a little difficult to believe that it would be degraded already without increasing melting and higher temperatures," said Prof McCarty.
"But as a scientist we can't say it's definitely climate change until we've done the analysis after the fire."
Peat fires worry researchers because the material stores large amounts of CO2 that is released through burning. They are also worried that the "black carbon" soot arising from the fires could land on the ice sheet and cause further melting.
Some rain is expected tomorrow which researchers hope will put the fire out.
Prof McCarty added: "I work a lot in this field and no-one has ever thought of doing a fire study in Greenland, I can tell you!"
at 7:55 AM