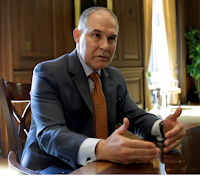 At least one nominee hopes to use a position on the board to challenge the science undergirding many environmental regulations. One has said in a statement that the world must "abandon this suicidal Global Warming crusade." Another compared people concerned about climate change to "Aztecs who believed they could make rain by cutting out beating hearts."

EPA has submitted 132 names for public comment as possible members of the panel. About a dozen of them have made comments rejecting mainstream climate science...The selection of any of those researchers would be the beginning of a very different advisory board that would bear the hallmark of the Trump administration's position on climate change, said Steve Milloy, [ author of Junk  Science Judo ]  ...who worked on President Trump's transition team for the agency.

"Had some other Republican won the presidency and a swamp creature taken over the EPA, this would not be happening," he said, "but thank God for Scott Pruitt that he's got the courage to do this."The Heartland Institute—a Chicago-based free-market think tank that pushes alternative climate science—nominated many of the current prospects... Here are some of the skeptical nominees under consideration:

Edwin Berry, a meteorologist and atmospheric scientist: He has funded his own climate research and says human carbon dioxide emissions do not cause climate change. He has compared those who believe in human-caused climate change to "Aztecs who believed they could make rain by cutting out beating hearts and rolling decapitated heads down temple steps." On his Twitter account, he has called Islam "a death cult" and has encouraged motorists to drive into protesters..."Let's get over this whole thing about climate change being an important thing, because in fact we humans have a negligible impact on climate," he said. "And if we had the Paris Agreement and everything else, it wouldn't do any good anyway."

Craig Idso, a senior fellow at the Heartland Institute: . His work has centered on highlighting how increased carbon dioxide will benefit plants.

[ The plants most likely to benefit are coal burning ones  like Four Corners, -  the Western Coal Association has been paying  Idso, pere et fils  bills for the past 40 years ]


Paul Driessen, a senior policy adviser at the Committee for a Constructive Tomorrow, a libertarian environmental think tank...holds that spiking levels of atmospheric carbon dioxide benefit the Earth. "The world must abandon this suicidal Global Warming crusade," the group stated in its founding statement. "Man does not and cannot control the climate."

Gordon Fulks, a physicist and adviser to the Cascade Policy Institute... He has said those who express concern about climate change are like a "societal pathogen that virulently spreads misinformation in tiny packages like a virus."

Milloy accused the panels of being " cronies of EPA, they fall in line, they do what EPA wants," he said. "It's extraordinarily rare that they dare to question the EPA and, if they do, then the EPA just ignores them. If they're not rubber stamps, then they're useless."

Heartland Institute Science Director Jay Lehr PhD somehow failed to make the cut. Could Administrator Pruitt  be chary of  glad-handing  an ex-con who did Federal prison time for defrauding the EPA of over $100,000 ?
at 2:25 PM