FORECAST  FOR  THE LEVANT: BLOODY  WITH  OCCASIONAL
DRONE CLOUDS & SCATTERED  SHOWERS  OF  PROPAGANDA

By David Hambling
On the night of 5 January and into the early hours of the next day, Russian forces in Syria came under attack by a “massive application of unmanned aerial vehicles”, says the Russian Ministry of Defence. It is the first announced use of a swarm of drones in a military action, but is unlikely to be the last.
According to reports, 13 small drones descended on Russian forces, but none did significant damage. Seven were destroyed by anti-aircraft defences and the others were brought down using electronic countermeasures to hijack or jam the drone’s controls and land them intact.
The captured aircraft seem crudely made, with a wooden undercarriage and plastic sheeting, powered by a small liquid-fuel engine. Under their wings, the drones carried several locally made bombs fitted with 3D printed plastic fins.


The Russians in Syria have been defining the threat the old fashioned way,

by knocking it down & taking its rather disappointing picture: 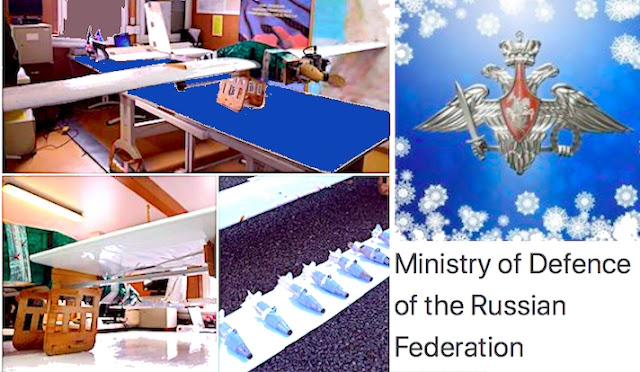