"[M]any in  the intelligence world... suspected  right away that the story the  Chinese government  was telling about this virus was almost certainly a lie.

The first indication of that was the torrent of obvious nonsense coming from official sources in Beijing.

Initially, Chinese officials claimed the virus had jumped from an obscure, scaly animal called a pangolin, which was sold in the Wuhan wet market. That explanation didn’t make sense. Wet markets are seafood markets. Pangolins are mammals. So for that matter are bats."

ALAS FOR TUCKER, THE CALLER REPORTS:

Here’s A List Of Some Of The Most Unusual Animals, Reptiles Available At A Typical Wuhan Wet Market
Chris White  Tech Reporter,   March 30, 2020 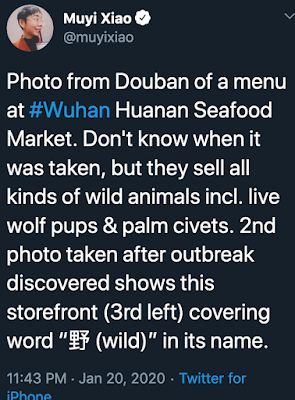 Vendors at Wuhan, China’s so-called wet markets sell everything from peacocks to kangaroos, and even an occasional camel or cat, according to reports in February.
Experts say these wet markets are where coronavirus, or COVID-19, originated in early December 2019 before hitting the United States, where it has killed nearly 3,000 people. Clerks in the market list crocodiles, wolf pups and cats as menu items, the South China Morning Post reported in February.

New York Times investigative reporter Muyi Xiao posted in a Jan. 20 tweet what he said was a copy of the menu
Here are some of the animals included in the picture Xiao posted:
NPR’s Jason Beaubien explained in a Jan. 31 article why people call them wet markets.
“I visited the Tai Po wet market in Hong Kong, and it’s quite obvious why the term ‘wet’ is used,” he wrote at the time.

“Live fish in open tubs splash water all over the floor. The countertops of the stalls are red with blood as fish are gutted and filleted right in front of the customers’ eyes,” Beaubien noted.
He added: “Melting ice adds to the slush on the floor. There’s lots of water, blood, fish scales and chicken guts. Things are wet.”
Scientists say the virus made its appearance through a process that ends in a the creation of a zoonotic disease, a virus that leaps from animals to people.
Here’s the process, according to researchers.

Wild and exotic animals are mixed with domesticated species in an environment that weakens the animals’ immune systems, leading to a mix of genetic code that can spread from one species to another, according to biologist Kevin Olival
at 12:48 PM